Author: Erynn Newman Book title: Out of Darkness
Release date: May 18, 2017
Genre: Romantic suspense
Elisabeth Allen gave her heart to Jesus as a little girl and to Drew Marek as a teenager. When their wedding day finally arrives, it’s the happiest day of her life–until a car bomb transforms her dream come true into a living nightmare.
As Best Man at the wedding, Gabriel Di Salvo promises Drew–his best friend and CIA

partner–he’ll look after Elisabeth, but he never dreams it will become necessary so soon. As Elisabeth struggles to put the pieces of her life back together without Drew, Gabe becomes her rock, and as they share their grief and begin to heal, their friendship gradually deepens into something more.
Three years later, Gabe and Elisabeth are planning a future together when he receives a shocking call from the one man who can upend his happiness: Drew. Suspecting someone at the CIA is behind his abduction, Drew refuses to come home. Instead, he asks Gabe to bring Elisabeth to him. Now Gabe just has to figure out how to let her go.
Drew and Elisabeth race across Europe, dodging international arms dealers and attempting to reclaim what was stolen from them. But years of captivity and torture have left their mark on Drew. He is no longer the same boy Elisabeth fell in love with, but he is still her husband, and she’s determined to build something new and leave her relationship with Gabe in the past, if her heart will get the memo.
When their enemies close in and the threat of a terrorist attack escalates, Gabe may be the only person they can trust. Drew, Elisabeth, and Gabe are thrown into a fight for their lives–one that will test their loyalties to God, country . . . and each other.

MY THOUGHTS:
An intriguing story of heartbreak, healing, readjusting and just when Elisabeth believes she can move on in her life. BOOM! Her world is turned upside down. Poor Elisabeth- I felt so sorry for her as well as Drew and Gabe. Will it all work out in the end where everyone is happy? You gotta read the book, its great!!

Blessings,
Karen Hadley
Rating: 5
I received this book as a gift. All opinions are my own.

Erynn Newman is a pastor’s kid, raised in churches all over the Eastern Seaboard. Since earning her degree in Christian Studies, she has traveled the world and served as a missionary, a counselor, an ESL teacher, and a nanny. Though she has never worked with the CIA, her DVR contains a veritable Who’s Who of international spies. She is a Carolina girl, a wife, and Mama to a very busy little boy, two cats, and a gaggle of characters that live inside her head.

20 Facts About Out of Darkness 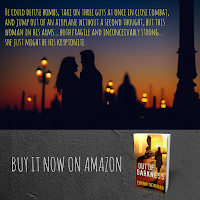 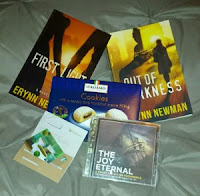 To celebrate her tour, Erynn is giving away a grand prize of a signed copy of Out of Darkness, a signed copy of First Light, The Joy Eternal~A Sweet and Bitter Providence CD, a $10 Starbucks gift card, and Italian Chocolate Hazelnut Creme Cookies.!! Click below to enter. Be sure to comment on this post before you enter to claim 9 extra entries! https://promosimple.com/ps/beac