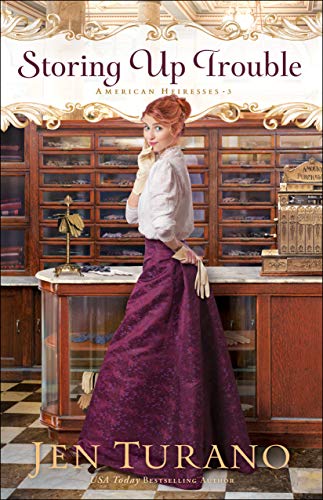 HEY, HOW'S EVERYONE DOING WITH ALL THE TIME WE HAVE HAD DURING THE "STAY AT HOME" ORDER?  ONE THING I'VE DONE IS READ JEN TURANO'S NEWEST BOOK " STORING UP TROUBLE"  IF YOU'VE READ ANY OF HER BOOKS THEN ALL I WOULD HAVE TO SAY IS JEN TURANO HAS A NEW BOOK OUT! YOU WOULD BE ON THE COMPUTER TO BUY IT! BUT SINCE SOME OF YOU MIGHT NOT HAVE READ ANY OF HER BOOKS, YOU ARE MISSING OUT! I HAVE READ EVERY ONE OF HER BOOKS AND COULD HARDLY WAIT TO READ THIS NEW ONE. I LOVE BEATRIX AND NORMAN. I ADORE AUNT GLADYS, EVERYONE NEEDS A AUNT GLADYS IN THEIR LIVES. SHE'S GENEROUS, COMPASSIONATE YET QUIRKY JUST LIKE HER NIECE BEATRIX. BOTH LADIES ARE ENTERTAINING JUST AS NORMAN IS NOT YOUR TYPICAL HERO! BUT NEVERTHELESS, HE IS CHARMING AND PREDICTABLE AND EXTREMELY INTELLIGENT. READ THE BOOK!! YOU WILL FEEL LIKE YOUR A CHARACTER IN THE STORY AND FOR JEN'S BOOKS, THAT IS A WONDERFUL WAY TO FEEL!!!!!!! Blessings:     Karen         Rating: 5*
1 comment
Read more
May 03, 2020

About the Book Book:   Dark Water Author:  Christy Barritt Genre:   Romantic Suspense Release Date:  January 28, 2020 A FORMER NAVY SEAL HAUNTED BY HIS PAST Colton Locke can’t forget the black op that went terribly wrong. Desperate for a new start, he moves to Lantern Beach, North Carolina, and forms Blackout, a private security firm. Despite his hero status, he can’t erase the mistakes he’s made. A WIDOW WITH SECRETS For the past year, Elise Oliver hasn’t been able to shake the feeling that there’s more to her husband’s death than she was told. When she finds a hidden box of his personal possessions, more questions—and suspicions—arise. The only person she trusts to help her is her husband’s best friend, Colton Locke. THE FIGHT FOR JUSTICE Someone wants Elise dead. Is it because she knows too much? Or is it to keep her from finding the truth? The Blackout team must uncover dark secrets hiding beneath seemingly still waters. But those very secrets might j
5 comments
Read more
More posts