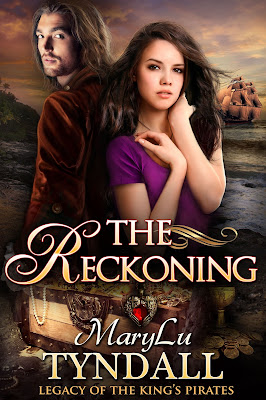 February 25, 2016     "The Reckoning" by Marylu Tyndall When Morgan Shaw crept into the hold of an old pirate ship replica at San Diego’s Annual Tall Ship Festival, her only intention was to avoid the guy who had just dumped her. What she didn’t expect was to wake up aboard a real pirate ship three-hundred years in the past. Captain Rowan Dutton is but one prize away from accomplishing his goal when a strange woman appears on his ship and causes him to lose his prey. Despite his anger, he is enthralled with the little minx. Yet when the brazen little lady divulges Rowan’s secret to a longtime nemesis, events are triggered that could cost them both their lives and change the course of history forever. My Review:        I enjoy Marylu's unique writing style in novels with pirates and ships. I listened to "The Reckoning" on audio. This was the first audio book for me. It was an adjustment for me to switch from reading to listening but as I moved fart
Post a Comment
Read more
February 22, 2016

February 22, 2016     About the Book Attorney Hope Finch is a rising star at the prestigious New York law firm of Rice & Taylor and is used to high-stakes litigation. But when she’s sent to what she thought was a small, sleepy town in Georgia, she is unprepared for the dangerous turn of events that threatens her life and career. FBI Special Agent Gabe Marino knows that something sinister is happening in his hometown of Maxwell, Georgia. But even he doesn’t know how big the threat is until he’s assigned to protect a visiting big city lawyer. As Gabe investigates the illegal activity linked to Hope’s client, he tries to caution her, but she ignores his warnings—until it’s her life that’s in jeopardy. When Hope becomes the target in a deadly corporate cover-up that is directly tied to the biggest trial the town of Maxwell has ever seen, she and Gabe have to find a way to work together. Hope and Gabe race against the clock to uncover the true threat, but can Gabe keep Hope safe
Post a Comment
Read more
February 18, 2016

FEBRUARY 18, 2016 I recently discovered Darlene Franklin's books. I'm hooked. You may not agree that my world is wide, since I live in a nursing home, but ever since moving into assisted living three years ago my writing opportunities have multiplied! I’ve had twelve contracted books published, six older stories included in new collections, and jumped into indie publishing a year ago, with nine new ebooks available.    Texas Trails Series Lone Star Trail Judson “Jud” Morgan’s father died for Texas’ freedom during the war for independence. So when the Society for the Protection of German Immigrants in Texas (the Verein) attempts to colonize a New Germany in his country, he takes a stand against them. After Wande Fleischers’ fiancé marries someone else, the young fraulein determines to make a new life for herself in Texas. With the help of Jud’s sister Marion, Wande learns English and becomes a trusted friend to the entire Morgan family. As much as Jud dislikes the immigrant
Post a Comment
Read more
February 16, 2016

February 16, 2016         Terri Blackstock is a  New York Times best-seller, with over six million copies sold worldwide. She is the winner of two Carol Awards, a Christian Retailers Choice Award, and a Romantic Times Book Reviews Career Achievement Award, among others. She has had over twenty-five years of success as a novelist. Today her book "If I Run" is released and you will want to hurry and grab a copy. But make sure you have plenty of time to read because you keep reading to see what happens. Overview Casey Cox’s DNA is all over the crime scene. There’s no use talking to police; they have failed her abysmally before. She has to flee before she’s arrested . . . or worse. The truth doesn’t matter anymore. But what is the truth? That’s the question haunting Dylan Roberts, the war-weary veteran hired to find Casey. PTSD has marked him damaged goods, but bringing Casey back can redeem him. Though the crime scene seems to tell the whole story, details of the
Post a Comment
Read more
February 09, 2016

FEBRUARY 9, 2016 IT'S RELEASE DAY FOR "THE SPY'S DEVOTION" BY MELANIE DICKERSON I love Melanie's books, I look forward to each new release and this one did not disappoint. Written during the Regency Era. A different path than her previous novels but written just as well. She has a distinctive talent in her writing skills. I enjoy this novel very much. The story between Nicholas and Julia will capture you from the beginning and through every page as they face pain, betrayal, life-changing decisions as God works in their lives for His greater good. This is definitely a must read. Blessings, Karen
1 comment
Read more
February 08, 2016

February 8, 2016         ﻿ The Forgotten Recipe After losing her fiancé in a tragic accident, Veronica Fisher finds solace in the old recipes stored in her mother’s hope chest—and in a special visitor who comes to her bake stand to purchase her old fashioned raspberry pies. Veronica Fisher is devastated when her fiancé, Seth, is killed in an accident at work. Seth’s friend, Jason Huyard, was with him and blames himself for Seth’s death. Although Jason has never met Veronica, he feels as if he knows her because Seth talked about her constantly. After the accident, he can’t seem to get Veronica out of his mind. Two months later, Veronica is cleaning the attic and comes across her mother’s old hope chest. She finds an old recipe and soon discovers that baking helps her cope with her grief, so she opens a bake stand to sell her pies. Jason starts visiting the stand weekly and their friendship grows, but Veronica isn’t ready to court again. And Jason h
Post a Comment
Read more
More posts