About the Book Book:   Cold Case Pursuit Author:  Dana Mentink Genre:  Romantic Suspense A cold case solved by the K-9 unit… but the past is not so easily escaped. Decades after her parents’ murders, Penelope McGregor’s grateful the killer’s finally been identified—until he comes after her. Now Detective Tyler Walker and his K-9 partner, Dusty, must protect Penelope and catch the culprit…while making sure his little girl stays out of the crosshairs. But can the single father outplay a killer whose endgame will leave no one safe?   Click here to get your copy!   About the Author Dana Mentink is a two time American Christian Fiction Writers Carol Award winner, a Romantic Times Reviewer’s Choice Award and a Holt Medallion winner. She is a national bestselling author of over forty titles in the suspense and lighthearted romance genres. She is pleased to write for Harlequin’s Love Inspired Suspense, Poisoned Pen Press, and Harvest House. Besides writing, she busies herself puttering around
6 comments
Read more
January 17, 2021 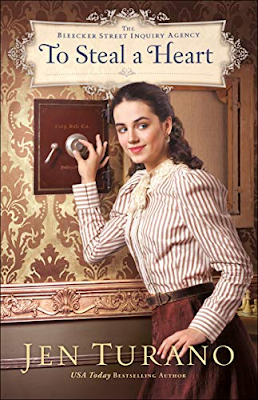 JEN TURANO'S NEW RELEASE   !!!!!!!!!! After a childhood as a street thief, Gabriella Goodhue thought she'd put her past behind her until a fellow resident at her boardinghouse is unjustly accused of theft. In the middle of breaking into a safe that holds the proof to prove her friend's innocence, Gabriella is interrupted by Nicholas Quinn, the man she once considered her best friend--until he abandoned her. After being taken under the wing of a professor who introduced him into society and named him as heir, Nicholas is living far removed from his childhood life of crime. As a favor to a friend, Nicholas agreed to help clear the name of an innocent woman, never imagining he'd be reunited with the girl he thought lost to him forever. As Gabriella and Nicholas are thrown together into one intrigue after another, their childhood affection grows into more, but their newfound feelings are tested when truths about their past are revealed and danger follows their every step.
Post a Comment
Read more
More posts