Author: Diane CraverBook: A Plain Widow
Genre: Amish romance
Release Date: March 10, 2017
Molly Ebersol’s life changes in a few minutes when an arsonist torches their barn. Her husband, Caleb, rushes inside the burning barn to save his horses. Although Amish firefighter, Jonathan Mast, tries to save Caleb, he fails. Suddenly Molly becomes a widow.
A month later, an anonymous person gives money to cover the lumber and food expenses for the barn raising. One late night more money is left for Molly on the porch. The fire investigator wonders if the arsonist feels guilt about Caleb’s death and is responsible for the money gifts.
During the continued investigation, it’s learned that Caleb had secrets he kept from Molly. She is crushed by what Caleb did before meeting her. How could the love of her life kept his English past from her?
Her new neighbor, Jonathan, helps her to make the difficult transition from wife to widow. Although Molly develops feelings for Jonathan, can she ever trust him to be truthful to her? She isn’t sure she can fall in love again. Her trust in relationships is shattered because of Caleb’s past actions.
May 2, 2017
MY THOUGHTS:
Diane Carver’s new book “A Plain Widow” is a
good story of one woman’s heartache and pain of
losing her husband in a fire. Her community and
family helps and support her. Someone is donating
money to have her barn rebuilt and giving her
money.
Who could be leaving the money? Who started the fire?
What will Molly do with a young son and expecting her
second baby?
What is it about a certain Amish firefighter that draws
Molly?
How does Molly cope when she finds out
the secrets her husband kept from her.
Read the book and find out for yourself. It is a fairly quick
read and throughout its pages you’ll see a man and a woman
seeking God’s will and the desire to be obedient to Him. A great
story about healing, moving forward, learning to trust and
a sweet romance.

Blessings,
Karen Hadley
Rating:4*
I received this book as a gift and my opinion is my own. 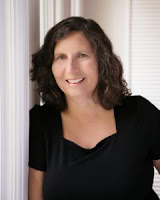 Diane grew up on a farm outside Findlay, Ohio, and she often acted out characters from her own stories in the backyard. In high school she would read during classes and hide a novel in front of her in a propped up textbook. After Diane graduated from the Ohio State University, she became a schoolteacher and play director.
She met her husband while teaching at an orphanage, and they married three years later. Diane says that it took her that long to convince him she was the one for him! While raising their family in southwestern Ohio, she started writing nonfiction and was published. Later, Diane decided it would be a nice escape to write fiction. They were blessed with five daughters and one son. Two daughters were born with Down syndrome and live at home. Their other children live close by. Diane has four adorable grandchildren. Her favorite vacation is going to the beach with the whole family.
Non-fiction articles of Diane’s have been published in Woman’s World Weekly, The Catholic Telegraph, Virtue, Down Syndrome Today, WritersWeekly.com, and other publications. Several of Diane’s books have been a reviewer’s top pick from Night Owl Reviews as well as receiving 5 star reviews and A Joyful Break (Dreams of Plain Daughters) received the CTRR Reviewer’s Recommend Award from Coffee Time Romance and More.Diane gives thanks daily to God for all her blessings.

Back in 2012, when I told our adult children I had written my first Amish book, they looked surprised. In the past I had written contemporary Christian romance, but I had never mentioned anything about researching the Amish faith for my future books. My great-grandfather was a Mennonite minister, but I never knew him. My mother shared stories about his faith and his strictness in raising children. With many similarities between my great-grandfather’s faith and the Amish beliefs, I was drawn to learn more about the Plain life.
Another influence came from my father. While growing up in Findlay, Ohio, my father respected and enjoyed talking with the Amish from Kenton, Ohio. As a farmer, he used both work horses (something he had in common with his Amish acquaintances) and a tractor. In my book, A PLAIN WIDOW, my character, Jonathan Mast, is from Kenton. Unfortunately, my children never knew my father, but they learned how precious he was to me from reading my book, A GIFT FOREVER.
Now several books later, I am still writing Amish fiction. I feel blessed that God directed me on this writing path. A wonderful aspect of writing in this genre is finding Amish recipes to prepare in my kitchen. One of my favorite recipes is also my character Molly’s specialty in my new release. This Amish recipe is an easy bread to make and takes around twenty minutes to prepare.
Delicious Amish Cinnamon Bread
(Makes 2 loaves)
Batter:
1 cup butter, softened
2 cups sugar
2 eggs
2 cups buttermilk or 2 cups milk plus 2 tablespoons vinegar or lemon juice
4 cups flour
2 teaspoons baking soda
Cinnamon/sugar mixture:
2/3 cup sugar
2 teaspoons cinnamon
Cream together butter, 2 cups of sugar, and eggs. Add milk, flour, and baking soda. Put 1/2 of batter (or a little less) into greased loaf pans. (Basically pour 1/4 of the total batter into each pan.)
Mix in separate bowl the 2/3 cup of sugar and cinnamon. Sprinkle 3/4 of cinnamon mixture on top of the 1/2 batter in each pan. Add remaining batter to pans; sprinkle with last of cinnamon topping. Swirl with a knife. Bake at 350 degrees for 45-50 min. Or until toothpick tester is clean.
Cool in pan for 20 minutes before removing from pan.

To celebrate her tour, Diane is giving away:
GRAND PRIZE: Diane is giving away a set of the Dream of Plain Daughters Series (4 book series) and a $20 Amazon gift card. If the winner is outside of the US, ebooks will be substituted.
RUNNER-UP: A copy of AMISH BABY SNATCHED, the first book in The Bishop’s Daughters Series and a $10 Amazon gift card. 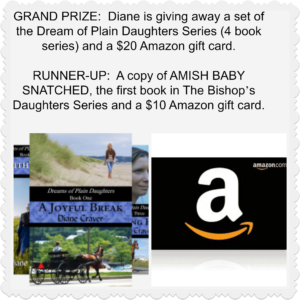 Click below to enter. Be sure to comment on this post before you enter to claim 9 extra entries! https://promosimple.com/ps/b54a
Posted by Karen Sue Hadley at 1:00 AM