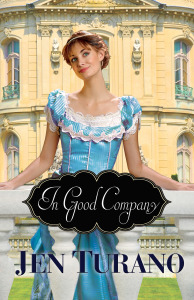 Jen Turano has a gift of injecting humor and lovable characters in her books. I had a blast reading "In Good
Company". I adore Millie and her sweet personality. She
is smarter than what some of the other characters think of her.
I cheered for her in the tennis match between her and Caroline. I fell in love with the children, their antics and laughed when Millie would beat them at their own game to win their affections. Everett won my attention when he realized the social set were really snobs. When I met his parents on the pages I was nicely surprised at how their outlook on life changed. When they met Jesus as their Saviour! Awesome!
He works that way! Such great characters that you will think you are in the room with them having tea or a part of whatever
mayhem comes their way.  I was relieved when the truth of the children's parents death was revealed and Caroline was put in her place.
Caution: Beware of the peacocks!

I do hope that this review peaks your curiosity and that you will take the time to read this book. You won't be disappointed!


Jen Turano is the critically acclaimed author of The Ladies of Distinction Series, published through Bethany House.  Her novel, A Most Peculiar Circumstance, was chosen by Booklist as a Top Ten Romance for 2013.
Jen grew up in St. Clairsville, Ohio, a small city bordering Wheeling, WVA.  Her childhood was idyllic and she spent many an hour ice-skating on a little pond, playing with friends in her treehouse, boating at the lake, and reading under the shade of numerous trees.  High School, surprisingly enough, was fabulous.  She roamed the halls with eight wonderful girls, all of whom she’s still friends with to this day.  Student Council took up much of her time as she was Secretary of her class all four years, Vice-President of Student Council her junior year and President her senior year.  After High School, she began her next great adventure – College.  Pursuing a degree in Clothing & Textiles, Jen was a member of Alpha Phi sorority.  She left college after the required four years and set out to take the fashion world by storm, finding out that fashion wasn’t nearly as glamorous as she’d been led to believe.
Meeting her husband, Al, when she was working at a department store in upstate New York, she married him mere months after they’d met, to everyone’s concern.  Twenty-something years later, she and Al are still going strong, proving the concern was all for naught.  Her son, Dominic, was born after she’d been married for quite some time, and it was then she decided to hang up her heels and settle into the best job of her life – Mom.
Her writing career began rather oddly, right when Dominic was in the third grade.  Disgusted with a series they’d been reading together, Jen and her son set about writing a book of their own.  It was a strange story, filled with smelly beasts who had a propensity for eating children, or at least wanting to eat them, but Dominic proclaimed it to be perfect and that was all it took for Jen to begin writing in earnest.  Her earlier works were met with swift rejections, but when she settled on romance, she managed to snag an agent and she’s been writing romance ever since.
When Jen’s not writing, she spends her time hiking around Colorado, socializing with friends and family, and taking great pride in watching Dominic, who will soon be off to college, turn into a remarkable young man.  (For readers of A Change of Fortune – Dominic was the inspiration behind little Ben – which is why you won’t be surprised to learn Jen’s been slightly taken aback over the fact Dominic’s turned out so well.)


Jeffrey to Felicia – Given your peculiar fashions over the past four years, I’m afraid you’ve caused people to believe you’re a little insane.

Felicia (to Grayson) – To think Eliza truly does seem to be under the misimpression that you’re capable of charm.

Honestly, he could be adorable, and at the moment she had the feeling he wasn’t even trying.

Jen Turano
A Most Peculiar Circumstance

She reached the powder room and shut the door behind her, jumping in fright at the sight that met her gaze in the mirror, until she realized it was her reflection. She peered closer and grinned. She looked deranged.

A Most Peculiar Circumstance
This madcap battle of the sexes is the sequel to Turano’s hilarious A Change of Fortune (2012), and it is perfect for any reader who enjoys stories bubbling with humor.

-Am I allowed to call you Grayson, or have you assumed a new identity as well? -He’s Frank.

One would think that since Hamilton and Eliza only just got married, our mothers would be satisfied for a while, but instead they seem to have come to the conclusion that everyone needs to enter into the state of wedded bliss. Quite frankly, they’ve turned scary.

Jen Turano
A Most Peculiar Circumstance

Agatha – You’re somewhat odd. You know that, don’t you? Felicia – I’ll take that as a compliment. Agatha – It wasn’t meant as such…

Miss Sumner, may I inquire as to why you’re lounging on the floor?” Mrs. Watson asked. Miss Sumner uttered something which sounded very much like “it should be obvious” before she lifted her head. “You really must compliment your staff, Mrs. Watson. This floor is remarkably clean.

Jen Turano
A Change of Fortune